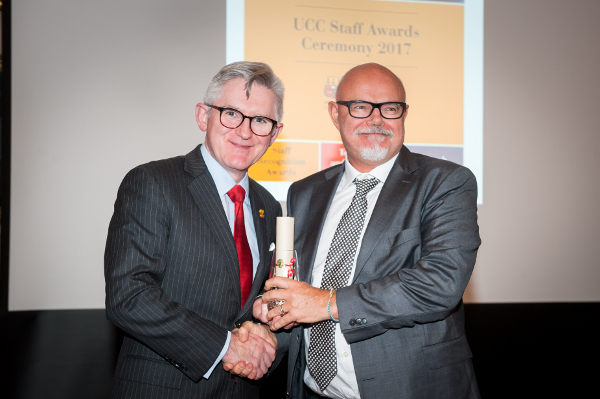 Congratulating Alan, Professor Linda Doyle, Director of CONNECT, said: “Alan is a fantastic researcher and his record speaks for itself. But he is also a warm, generous and open person and this has given his work even greater impact.

“Those of us who have been privileged to work with Alan have always been impressed by his humility and so we are delighted to see him honoured in this way.”

Alan joined UCC in 1982 as a Research Scientist in the fledgling NMRC (National Microelectronics Research Centre) which became the Tyndall National Institute in 2005.

In the intervening 35 years, he played a leading role in establishing UCC and Tyndall as a global leader in microelectronics research excellence, training and education. His research output and his graduate students have had a major impact on the development of the microelectronics industry in Ireland and worldwide.

The citation for Alan’s award commended his research which has been ‘characterized by scientific excellence with real technological impact.’

It continued: ‘Working in Ireland in the 1980s and 1990s, he established a major research activity (at a time when there was virtually no national research funding support) which made ground‐breaking contributions across a range of related microelectronics research problems.

‘At a technological level, he demonstrated, in 1989, the first ever 3D integrated circuit (stepper motor controller) using electron beam recrystallization and zone melting recrystallization technologies to create the upper recrystalised layer, opening a research field that is of critical importance, and where his ongoing contributions continue to be highly regarded.

‘Over the years, his experimental work has been strongly underpinned by an excellent theoretical understanding. His device modeling research has transformed the global microelectronics CAD and T‐CAD communities in the mid‐to late 1990s and has had a major influence on CAD platforms developed by key industry players including Silvaco and Cadence.

‘Most recently, he has extended his interests to the use of AlN‐based piezoelectric materials for energy harvesting. His team has achieved world‐leading figures‐of‐merit for energy harvesting applications and the technology has been transferred to Analog Devices European Microsystems Fabrication Facility in Limerick, as well as being the subject of keynote speeches at two international conferences.

‘In his career he has trained and mentored more than 50 graduate students as well as over 100 post-doctoral staff, all of whom are now contributing, in senior executive or technical roles, to the global microelectronics industry in many tier‐one companies and institutes and in particular in Irish start‐up companies SensL, Infiniled (now Oculus‐Facebook), Redmere and Powervation (now Rohm).’