CONNECT has recognised the achievements of several researchers at the Centre’s inaugural awards ceremony held during the annual plenary assembly in Kilkenny. Adam, a postdoctoral researcher in the School of Electrical & Electronic Engineering at TU Dublin, received the award for ground-breaking work on full-duplex radios, which could lead to more secure wireless communications. “A full-duplex radio doubles the communication speed of a wireless device,” Adam explains. “The device can transmit and receive signals simultaneously – a feature currently not implemented in any commercial product. Its benefits are so great that this research area is sometimes called the holy grail of telecommunications.
Congratulating Dr Narbudowicz, Prof. Max Ammann said: “This is a well-deserved recognition of Dr Narbudowicz’s ability to combine basic theoretical research with commercially-oriented investigation. This is his third award in under a year, having already won prizes at the International Symposium on Antennas and Propagation (ISAP) in Thailand, and just recently during the IEEE-EURASIP Summer School on Signal Processing in Italy.

The award is named in memory of the late Prof. Tom Brazil who was a Principal Investigator at CONNECT until his untimely death earlier this year.

Andrew, an Assistant Professor at the School of Computer Science in UCD, received the award in recognition of a technique, developed with Google, which is now used to assess the audio quality of YouTube’s most popular videos. “This area of research is called ‘Quality of Experience and it is key pillar in CONNECT’s research platform,’” Andrew explains. “The research leading to this development was conducted during my time in UCD, DIT, and Trinity College Dublin. “Our work has also been used in the development of the OPUS codec which is used to stream over 1 billion minutes of audio per week through the Chrome browser. The model has been freely shared and is used for research and development across other industry leaders such as Microsoft and Apple.” In May, Dr Hines was awarded the 2018 American Chamber of Commerce/Royal Irish Academy Research Innovation Award in the HEI category in recognition of his research in this area. Later this year, a production-quality release of the ViSQOL audio quality platform, which has emerged from his research, will be released through Google-branded channels as a royalty-free, open-source product. 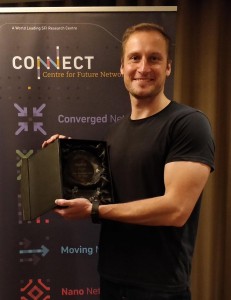 Dr Jacek Kibilda received the CONNECT EPE award in recognition of his work with migrant teenagers in Dublin, in particular his 2017 initiative to create a programme for Transition Year (TY) in partnership with the Separated Children’s Service managed by the City of Dublin Education and Training Board. Dr Kibilda’s is a Fulbright Tech-Impact Scholar and has conducted research with the Wireless Networking and Communications Group at the University of Texas at Austin. He has published opinion pieces in The Irish Times on developments in 5G and Ireland’s readiness for the technology.Congratulating Dr Kibilda, Prof. DaSilva said: “I am very pleased that Jacek’s generosity is honoured in this way. In addition to his leadership of our TY programme, Jacek has also participated in multiple other public outreach activities. He is highly respected among his peers as an academic researcher, and is a fantastic role model for those seeking to combine high quality research with innovative public engagement.” Mariusz Wilk, a PhD researcher in Dr Brendan O’Flynn’s Wireless Sensor Networks Group at Tyndall National Institute, received the CONNECT EPE Award for his contribution to the centre’s outreach programme, in particular, his development of smart farming demos to prompt conversations with the public on the usefulness of the Internet of Things for agriculture. These demos have been at the heart of CONNECT’s presence at the National Ploughing Championships for the past two years. Last year, Mariusz also appeared on RTÉ’s ‘Big Week on the Farm’ TV show, during which he explained the value of wireless sensors in farming. The show attracted an audience in excess of 300,000 viewers. Over the past two years, Mariusz has reached out to audiences from different demographics, ranging from female secondary school students, industry stakeholders, third level undergraduate students, and the wider public.  Congratulating Mariusz, Dr O’Flynn said: “This is a well-deserved honour for Mariusz. In addition to being a generous volunteer for public engagement events, he has developed creative ways of presenting our smart sensor research to the public, including their deployment in smart agriculture applications. In particular, he has made use of Pervasive Nation, CONNECT’s IoT testbed, to illustrate the potential applications of wireless sensors in a farming environment. Mariusz is a great example of a dynamic researcher who is using public engagement as a way of deepening his understanding the wider context of his field of expertise.”