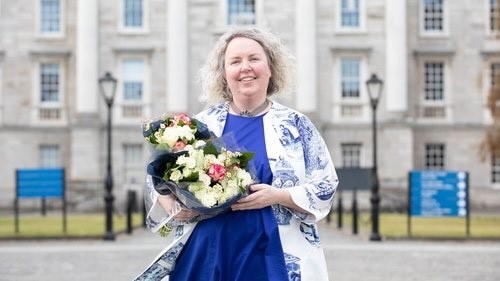 CONNECT’s founding director, Prof. Linda Doyle, has been elected Provost of Trinity College Dublin. She is the first woman to ever hold the role in the University’s 429-year history.  She will be the 45th Provost of the University and take office on 1 August this year.

“On behalf of the entire CONNECT team, I warmly congratulate Prof. Linda Doyle on her election as Provost of Trinity College Dublin!

“As Director of CONNECT, Linda Doyle imbued the centre with a unique blend of artistic creativity, engineering excellence, and continuous and empowering innovation.

“We wish her every success as she brings her outstanding leadership talents to this new and exciting role.

“On behalf of the Governance Board of CONNECT, the world-leading Science Foundation Ireland Research Centre for Future Networks and Communications, I congratulate Professor Linda Doyle on her election as Provost of Trinity College, the University of Dublin.

“Professor Doyle is a scientist of the highest international reputation, an administrator of great achievement and a leader of distinction in both fields. She was the brilliant founding Director of CONNECT and its predecessor, CTVR. She has been a distinguished advocate of the major roles that women can play in academic life, in the fields of Science, Technology, Engineering and Mathematics (STEM) and in the creative integration of scientific and artistic disciplines to the benefit of both.

“Professor Doyle will lead Trinity College, the University of Dublin, with distinction.”

Linda Doyle is Professor of Engineering and the Arts at Trinity and became the Provost-elect today after an election involving staff and student representatives. The Provostship has a term of ten years, during which the Provost is responsible for leading the University in achieving its core mission in education, research and innovation, and in strengthening its position as Ireland’s leading university on the world stage.  The Provost also plays a central role in promoting the University’s collegial way of life and cultural climate, continuing Trinity’s active engagement with society as well as taking the lead role in implementing the University’s Strategic Plan, fundraising for the University and advancing gender equality.

Professor Doyle has held the role of Dean of Research at Trinity and was the founder Director of CONNECT, the Science Foundation Ireland national research centre for Future Networks and Communications. Her expertise is in the fields of wireless communications, cognitive radio, reconfigurable networks, spectrum management and creative arts practices.  Professor Doyle has been Chair of the Douglas Hyde Gallery and is Chair of the Ofcom Spectrum Advisory Board in the UK. Originally from Cork, Professor Doyle initially studied electrical engineering at UCC, before completing a Masters and PhD in Trinity.