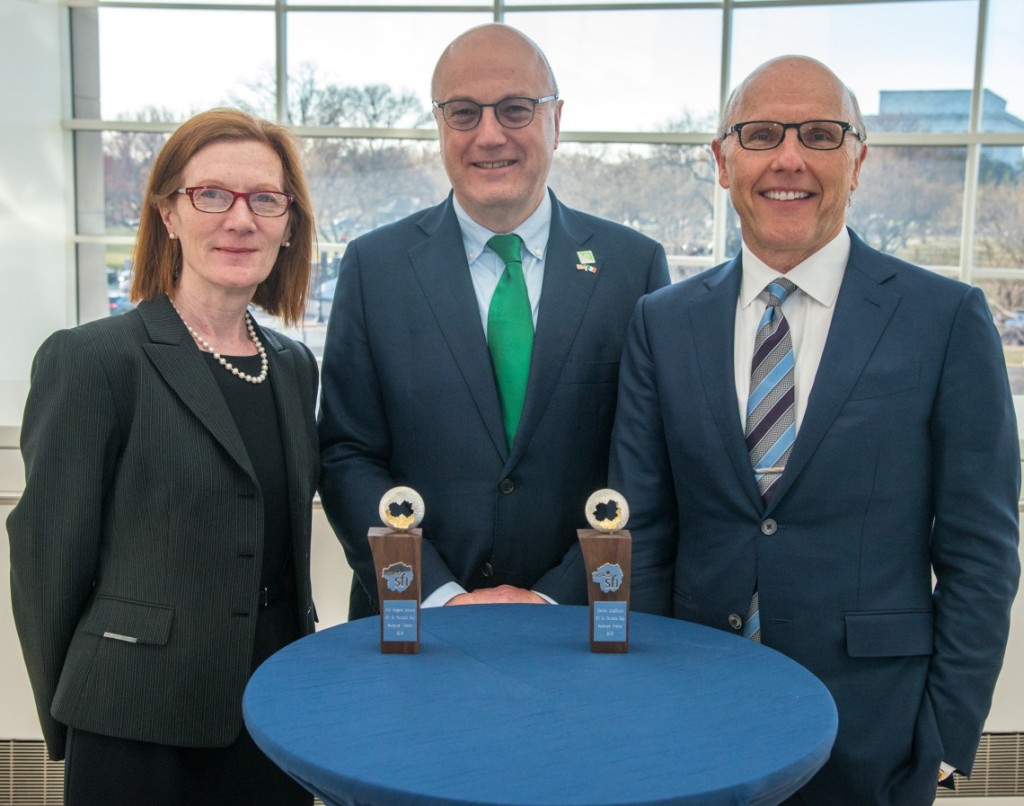 David McCourt, Founder and CEO of Granahan McCourt Capital – a CONNECT industry partner – has been awarded the 2018 St. Patrick’s Day Science Medal by An Taoiseach, Leo Varadkar TD. Professor Margaret Murnane, Professor of Physics and Electrical and Computer Engineering at University of Colorado, is a co-recipient. They have received the award for their significant contribution to academia, research and industry.

Congratulating the recipients at an award event held in the United States Institute of Peace in Washington D.C., An Taoiseach Leo Varadkar TD, said: “On behalf of the Irish Government and Science Foundation Ireland, I am delighted to present the SFI St. Patrick’s Day Science Medal to these two inspiring leaders from industry and academia. Prof. Margaret Murnane and David McCourt are both members of the Irish diaspora who are contributing significantly to research and innovation in their respective areas.”

The Taoiseach continued: “In recent years we have made considerable achievements in STEM research and industry. This national strategy will continue to push that forward; benefiting our economy, bettering our society, recognising our scientific heritage and integrating it into our modern culture.

“The Medal winners that we honour today are excellent examples of Irish diaspora STEM talent contributing to, and being hugely impactful in the US and beyond.”

A holder of Irish citizenship and with a home in County Clare, David McCourt has been incredibly active in Ireland’s academic ecosystem in terms of funding, employment, innovation and as part of the Irish Government’s Global Economic Forum. From early in his career David has been an innovator, developing a revolutionary technology that lowered the cost of building cable systems by 80%, which went on to become the industry standard. His drive, expertise and experience saw him founding the network and telecommunications company Granahan McCourt Capital, of which he is CEO.  In Ireland, Granahan McCourt has been highly active in expanding access to broadband through its part-owned company, enet, which operates next-generation, open-access telecoms infrastructure. David is also pioneering technology to develop ‘Broadband in a Box’ which aims to bring internet connectivity to the most underserved technology areas in the world.

A strong supporter of Irish research, he has provided considerable support to CONNECT, through substantial partnerships with his companies. Among his achievements David can include being the first-ever recipient in 1984 of the White House award recognising extraordinary accomplishments by private sector businesses. He also attended the eG8 Forum at the invitation of President Nicolas Sarkozy, to advise political leaders on the digital ecosystem.

At the event in Washington, Mr McCourt said: “I am delighted and honoured to accept the SFI St. Patrick’s Day Science Medal from Science Foundation Ireland. I have long been an advocate for Ireland as a place to do business. As an employer in Ireland, and with my own interest in R&D, I greatly value the culture of innovation and collaboration that exists between Ireland and the US. I believe that collaborative research with industry will continue to produce transformative advances that will enhance both our economies and societies.

“I believe that collaborative research with industry will continue to produce transformative advances that will enhance both our economies and societies.”

Congratulating the recipients, Prof Mark Ferguson, Director General of Science Foundation Ireland and Chief Scientific Adviser to the Government of Ireland, said: “The global reach and influence of the Irish scientific and technology diaspora plays a huge role in promoting Ireland internationally. The outstanding work and research carried out by Margaret and David has had a profound impact across the globe; their work has not only served Ireland extremely well, but it has also significantly enhanced our reputation as a nation of innovative and creative people. As a country, we should be immensely proud of the success and influence that they have had in their respective fields.”