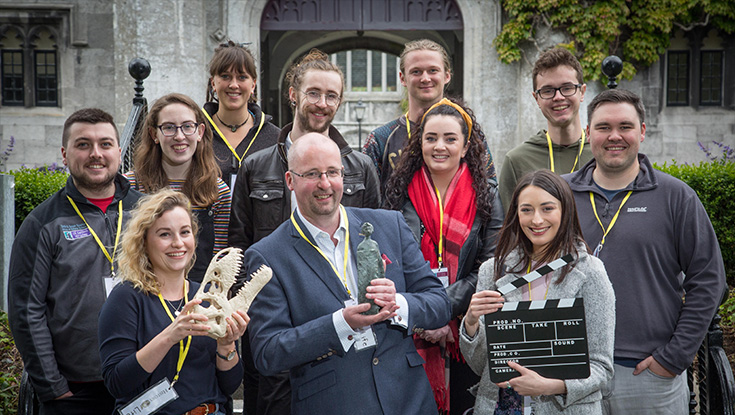 Alida Zauers, CONNECT’s Education and Public Engagement Officer at Tyndall National Institute, has shared in the success of the ‘History of life’ film project which has just won an international MEDEA Award for the use of video to communicate science. The project, which was developed and led by Dr John Murray at NUIG, picked up first prize in the User Generated Education Media category at the annual MEDEA awards ceremony in Leuven, Belgium.

The History of life film project picked up first prize in the User Generated Education Media category at the annual MEDEA awards ceremony in Leuven, Belgium. Alida participated in the project during her final-year studies in Earth and Ocean Sciences at NUI Galway creating an eight-minute video documentary on the evolution of bird beaks has now been viewed almost 38,000 times on YouTube.

“I’m delighted with the award,” Alida said. “It’s great recognition of the work of past and current students who have been a part of the History of Life film project.

“This project has been significant for me, as it sparked my interest in pursuing a career in STEM outreach in the first place.”

The project also won the audience favourite prize based on a poll of those attending the awards ceremony.

The History of Life Film Project was created to bridge the experiential gap for science students, and to explore the potential for film-making in enhancing learning and communication skills. The project was represented at the awards ceremony by John Murray and Labhaoise Ní Dhonnchadha from National University of Ireland Galway. According to the judges, the project “is a very good attempt to encourage students’ interest and curiosity in science and also to help building their research, communication and presentation skills. The project already has quite a good database of videos that can be used for different purposes both from teacher and learners, both for classroom and individual use.”

The MEDEA Awards recognise best practice in the use of media in education. Entries this year came from all over Europe, as well as the Australia, Canada, Iran, Morocco, Turkey and the USA.