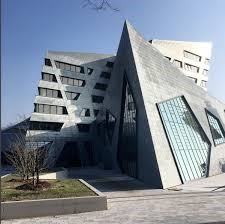 Surrounded by a WW2 military barracks, we spent the past week in a massive, futuristic building in the middle of Leuphana University, in the picturesque town of Lüneburg in northern Germany. The university is hosting the Digital Cultures Conference, organised by the Centre for Digital Cultures at Leuphana and the Institute for Culture and Society at Western Sydney University.

The CONNECT team consisted of Elma Avdic, Harun Siljak, Fiona McDermott and Jessica Foley, with Rachel O’Dwyer participating remotely via a video pre-record. We attempted to offer an evangelistic perspective on the culture of sharing within the realm of resources deemed unshareable. Our panel “Culture of Sharing in the Competitive Digital” was among the first presentations at the conference. The scheduling allowed us to attend the rest of the conference without the pre-presentation angst!

We spoke about radio spectrum and selfless machines, the little-known nature of electromagnetic spectrum and communications infrastructure; the question of data sharing and markets; the writer’s perspective on sharing, and the true nature of the machines. This multi-logue produced a rich stream of opinions, conversations, and ideas for the future.

The colourful world of diverse researchers at the conference told us about topics we would otherwise have missed such as cybernetic views on vigilante hackers, the history of Perl, and postmodernist takes on sharing economies. The conversations continued over coffee and dinners and included education, art, and cinematography (remembering Dušan Makavejev and his brilliant ‘WR: Mysteries of the Organism’, with Prof. Hart Cohen). And while Hart’s stories of his journey through Yugoslavia fifty years ago did remind us of the similar story told by David Lynch while preparing quinoa, it wasn’t the only Lynchian element of our journey. The hotel we stayed in had a touch of it as well, with its unusual working hours, red velvet curtains, rare guests and plants in pots you just couldn’t move.

The town itself had a touch of Wes Anderson—with beautiful facades, kind people (we befriended a half-Mongolian waiter with a passion for languages and history) and the usual German punctuality, order and rigour.

Coming to a conference where computer scientists know a lot about humanities, and artists and social scientists know a lot about computer science, we were ready for a revolutionary, free-thinking atmosphere of digital rebellion. The old barracks were in a sharp contrast to it, a reminder of the haunting past (Himmler committed suicide halfway between our hotel and the campus). But it was all in perfect alignment with the soundtrack of our walks, Marc Ribot’s new album Songs of Resistance: 1942-2018 (his version of Bella Ciao with Tom Waits).

Stickers on people’s laptops, train doors and lamp posts spoke of the fight against hate and dangerous politics. The presentations passionately addressed the problems of refugees, people in authoritarian regimes, whistle-blowers and ignored minorities. The lack of belief in capitalism and its ability to make the world a better place was evident. Although one could also see some art flirting with big capital and accepting some of the toxic culture which the rest were running from. Some of the art accepted no compromise whatsoever, and took us for a wild ride, like Konrad Becker’s audiovisual performance in the panel aptly named Algorithmic Anxieties.

Nate Tkacz, at the closing session of the conference, pointed out that those who study culture and those who study technology have to encounter each other and, with the help of digital culture theorists, produce meaningful research and knowledge across different fields of expertise. This conference may have been another stage of that encounter.

Auf wiedersehen Leuphana. Until next time.